This section will not be running in the 2021 Festival. 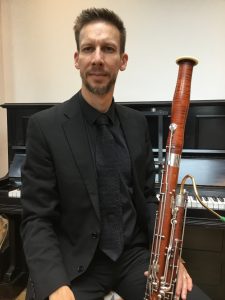 Graham Hobbs is a freelance bassoon player, who works regularly as guest principal and section player with the major orchestras of London and throughout the UK. As such, he has toured, broadcast and recorded extensively. He is also a teacher at the Purcell School and an examiner in music for Trinity College London.

Tom Hammond is equally at home working with top-flight international artists or conducting leading non-professional and youth orchestras, and regularly visits the Middle East to conduct ensembles from the Edward Said National Conservatory of Music, Palestine.

Tom received mentorship from the late Sir Charles Mackerras, and has given many premières of new music by, amongst others, Matthew Taylor, James Francis Brown and Bernard Hughes. A CD of world première recordings of music for families, conducted by Tom with Orchestra of the Swan and narrated by Alexander Armstrong, will be released on the Orchid Classics label in February 2020.

A champion of music-making outside the capital, Tom is Co-Artistic Director and founder of the Hertfordshire Festival of Music. Launched in 2016, it has rapidly grown to become one of the leading celebrations of classical music in England.

Tom’s work as a producer with Chiaro Audio has led to releases with Resonus Classics and First Hand Records, and forthcoming releases with Edition Peters Label. He was appointed an Associate of the Royal Academy of Music in 2010, and Conductor Emeritus of London’s Sinfonia Tamesa in 2019. 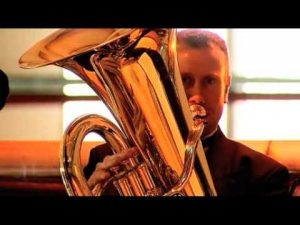 Since graduating from London’s Royal Academy of Music in 1998 Richard has appeared as guest principal tuba with many of the UK’s finest Orchestra’s including the BBC Concert & Scottish Symphony Orchestras, City of Birmingham Symphony Orchestra, Philharmonia, Royal Philharmonic Orchestra and the Ulster Orchestra. Off the stage (or rather under it!), Richard has also appeared in the orchestra pit with both the English National Ballet and Birmingham Royal Ballet Orchestras as well as off stage for English National Opera.

Richard’s theatre credits include Chicago (Adelphi Theatre, London), Tales from the Vienna Woods, London Assurance, Captain of Köpenick (National Theatre) and The Golden Ass (Shakespeare’s Globe Theatre).  In the studio, he has recorded for film and television, plus a wide range of other music as diverse as computer game soundtracks for Atari through to operas for Chandos with Sir Charles Mackerras and the Philharmonia.

A brass teacher for over 20 years he has taught all levels from beginner through to Conservatoire level and is currently head of brass at Westminster School with whom their first brass CD In Sono Tubae was recorded last year.

Away from the tuba Richard manages to combine his love of travel with that of the underwater world as a fully qualified Master Scuba Diver. He is also a keen cyclist and runner.

Dom is a classical saxophonist who enjoys a multi-dimensional career.

As an orchestral musician, Dom has toured, recorded and performed with the BBC Symphony Orchestra, Royal Northern Sinfonia, Royal Philharmonic Orchestra, Birmingham Royal Ballet Sinfonia, Oxford Philharmonic and the BBC National Orchestra of Wales,  including live broadcast for BBC Radio 3 and perfoming at the ‘Last Night of the Proms’.

In 2020 he will be performing across the UK including performing two concertos in St John’s Smith Square, London.

Between 2010-2018 Dom was the Alto Saxophonist in the award winning Forseti Saxophone quartet based in Cologne, performing in a number of Europe’s finest chamber music festivals and venues.

In 2017 Dom became the 1st Chair of the Hertfordshire Festival of Music. 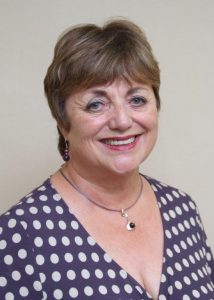 Angela’s distinguished career was launched with a highly acclaimed Wigmore Hall recital and shortly afterwards her concerto debut at the Royal Festival playing the Mozart Clarinet Concerto. Following these successes, her busy concert schedule took her to North and South America, Japan, Bermuda, India and Canada as well as most European countries. She was for thirty years Principal Clarinet with the London Mozart Players and appeared with them as concerto soloist as well as being a founder member of their distinguished chamber ensemble.

In addition to a flourishing career as a concerto soloist, her membership of the De Saram Clarinet/ Cello/ Piano trio, Albion Ensemble, Musicians of the Royal Exchange, London Winds and the Academy of St Martins has been a major part of her life, together with performing clarinet quintets with eminent string quartets at home and abroad and giving duo recitals with her husband, David Pettit. Angela has many broadcasts to her name, together with CD’s on several labels, including ASV, Chandos, Hyperion and EMI.

She recently retired from thirty-five happy years as Senior Clarinet Professor at the Royal Academy of Music who had awarded her the distinction of Hon. RAM. Masterclasses and International competitions are still very much part of her life. She is not only a Buffet Artist but also an Honorary Fellow of Royal Birmingham Conservatoire. 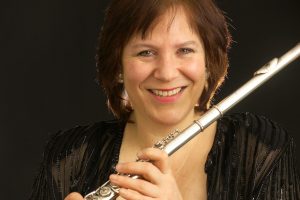 Since her celebrated performance of Mozart’s Concerto in D major at the BBC Proms in 1988, Philippa Davies is known internationally as one of the finest flautists currently performing; a’ first-rate virtuoso’ with ‘exceptional eloquence’. She has given many concerto performances and recordings with orchestras in the UK, Europe and North and South America. She was flautist with the Fires of London, Albion Ensemble, Principal Flute with the London Mozart Players and now is a member of the Nash Ensemble and London Winds. She regularly plays guest principal flute with the main London orchestras. There are many recordings to her name; Mozart, Bach Flute Sonatas and William Alwyn’s flute music. This season she is performing in France, Holland, Italy and Germany giving recitals and masterclasses, and plans to record the flute concerto by Paul Reade. Philippa is a Professor at the Guildhall School of Music, London and runs her highly successful summer courses at Cubertou, France.