The North London Festival of Music, Speech and Drama was founded in November 1920 by a group of  North London musicians, including music critics John Graham and Herman Klein. In the early years, the Festival was supported by eminent musicians including Sir Edward Elgar, Sir Charles Villiers Stanford and Dame Clara Butt. The Festival was launched at the Northern Polytechnic Institute in Holloway Road, at a time of significant growth in Music Education. The Birmingham Symphony Orchestra was formed the same year, Gustav Holst’s ‘Planets Suite’ had its first complete public performance and Ralph Vaughan Williams composed ‘The Lark Ascending’. Valuing excellence from the beginning, great musicians such as Sir Hugh Allen, Charles Proctor, Sir David Willcocks and Sir Colin Davis have helped steer the festival through various challenges and changes.

The Festival has run annually since 1920, apart from four years (1939 to 1943) during the Second World War. and the disruption due to COVID-19 in 2020. We were planning to celebrate the Festival’s Centenary in 2020, but as that has not been possible, we will be celebrating the 100th festival in 2024 instead. We did, however, launch centenary celebrations with a ‘Countdown to 100 years’ concert in November 2019 (final line-up pictured below). It was a fantastic night, with some exceptional performances. 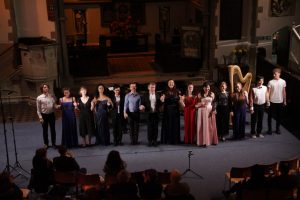 The festival is affiliated to the Incorporated Society of Musicians (ISM).